When you get your driver’s license, you know that you’ve been officially welcomed into the world of adults. Having your own car is the ultimate symbol of freedom. Of course, every freedom comes with responsibility. Cars are powerful machines, especially modern vehicles. Therefore, careless drivers can cause serious trouble on the road if they don’t use those machines in a safe way. Not only that but their actions could lead to them having to look for car insurance for people with points if they can’t find a provider who will be willing to offer them the coverage needed to insure a car. These are some of the reasons why it’s important to nip some bad driving habits in the bud. 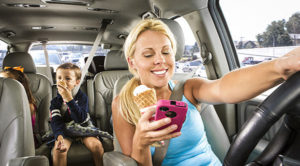 Speeding is one of the biggest enemies of comfortable and safe driving. Many drivers don’t obey traffic signs, but they follow their own rules and instincts. However, this driving style should be abandoned at once, since speeding is one of the major causes of fatalities in car accidents. If you lower your speed even by 5 km/h, you’ll significantly reduce the risk of fatalities in case of a crash. It’s safer to drive 5 km/h below the speed limit than 5 km/h above it. Also, here you can read more about a campaign launched on that matter by the Government of Victoria, Australia.

The second most dangerous driving habit is driving after drinking alcohol. Although you might feel more self-confident and courageous, it’s an illusion caused by alcohol. What actually happens is that your reflexes slow down and your perception deteriorates. As a result, you can’t react as fast as you could if you weren’t under the influence. A report published by the US Centers for Disease Control and Prevention shows that alcohol-impaired driving caused about one-third of deaths in traffic in 2014. So, when you’ve had a few beers after work, park your car and use public transportation or a taxi.

Every machine requires skillful and cautious treatment. The same rule goes for cars. If you want your car to last longer, you shouldn’t make any hasty moves while driving. Here are the aggressive features that should be avoided:

Sometimes you will be forced to make some safety compromises that you don’t like because of your budget. If you have a family and need a car, but you can’t afford a new model, you should at least maintain your vehicle regularly. For instance, check the fluids that don’t require disassembling the engine – motor oil, brake fluid and coolant. Moreover, you should use some practical on-road services, like the assistance provided by RoadsideVIP. Such a backup will help you a lot if your car lets you down in the middle of nowhere.

Apart from that, you should also take your car to the local service before setting off on a longer trip. Finally, it’s extremely important to change all the liquids and the vital parts of your car after a certain mileage. Consult your mechanic for these details.

Traveling in your own car is one of the most pleasant experiences you can have. The feeling becomes even stronger if you drive your family or friends. Bad driving habits will turn a potentially pleasurable journey into a rage-driven chaos. Because of that, do your best to change inappropriate driving behavior and become a cool, patient driver.