If you’re a smoker and your son sees you lighting one up, you best believe they’re copying you behind your back, picking up your used cigarette buds and well, pretending to be you, their hero! That isn’t the only way in which sons copy their dads however, so it’s not always something which is practiced in a negative way. They’re only doing what comes naturally to them, so it’s your responsibility to be a good example to your children, practicing good personal habits and practicing safe habits. 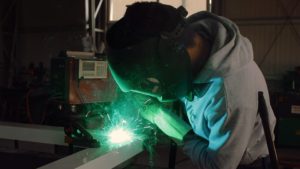 This applies even to areas such as the power tools you use in and around your home. What is naturally an innocent Saturday DIY bonding session between a son and his dad when the power tools are brought out to get some work done around the house could very well turn into a medical and financial nightmare if safety isn’t the order of the day. So power tools should have a halo of safety protocols surrounding them, to be stored away safely when not in use just so that you have all your bases covered and don’t run even the slightest risk of the kids injuring themselves with them when you’re not looking.

Teach them how to use the power tools properly

The last thing you want to bear witness to is the aftermath of a scene in which the inquisitive mind of a child was left alone with and had enough time with something like a welder, unless of course they knew exactly how to use it properly and safely. Many of the welders available at http://www.expondo.co.uk/welders/ have built-in safety features though, so I guess half your job is already done by just making the right choice in equipment. Either way, the very least you can do is teach them how to use any power tools you may have around the house properly, taking extra care to demonstrate to them all the safety precautions that form a non-negotiable part of any use of such tools.

This means that they should perhaps notify somebody (implicitly you) whenever they may want to use any power tools for something like a school project, or perhaps just to satisfy their curious minds, just so that there is some sort of “spotter” around to ensure all is well. It would also mean they must use all the associated safety gear like protective gloves from the likes of unigloves or similar companies, safety goggles, overalls, and more.

Nothing should be left to chance so that at least if they even think about crossing the line, they firstly know that a line exists and secondly, they know that some consequences will be awaiting them should they defy your rules. Since you should encourage your kids to explore their world though, the boundaries you set would probably be driven by the safety aspect of using power tools.

At the end of the day kids will be kids and the common belief that rules are made to be broken transcends the inquisitive minds of kids, but in the case of the kids you’ll perhaps want to put up some physical barriers to quell any desire in them to go against your boundaries set around the unsupervised use of your power tools.

This would simply entail something like locking the tools away or locking them up with something like a chain and lock, mounted up high in the garage somewhere so that their access would require a noisy and intensive effort.